Neonatal Seizure Etiologies in Relation to Onset and Relative Frequency

From Volpe’s Neurology of the Newborn, 6th Edition. 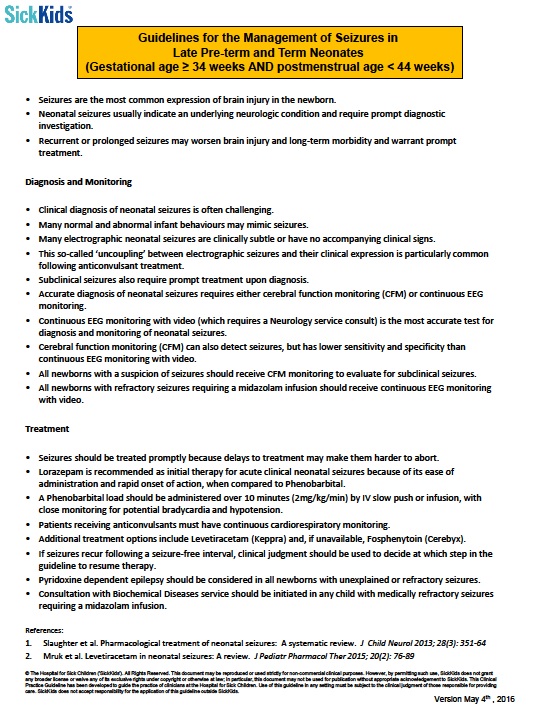 Neonatal encephalopathy is a clinical syndrome of disturbed neurological function that presents early in life, with an incidence of approximately 1/1000 to 6/1000 live births.

At the cellular level, hypoxia-ischemia results in two phases of energy failure: 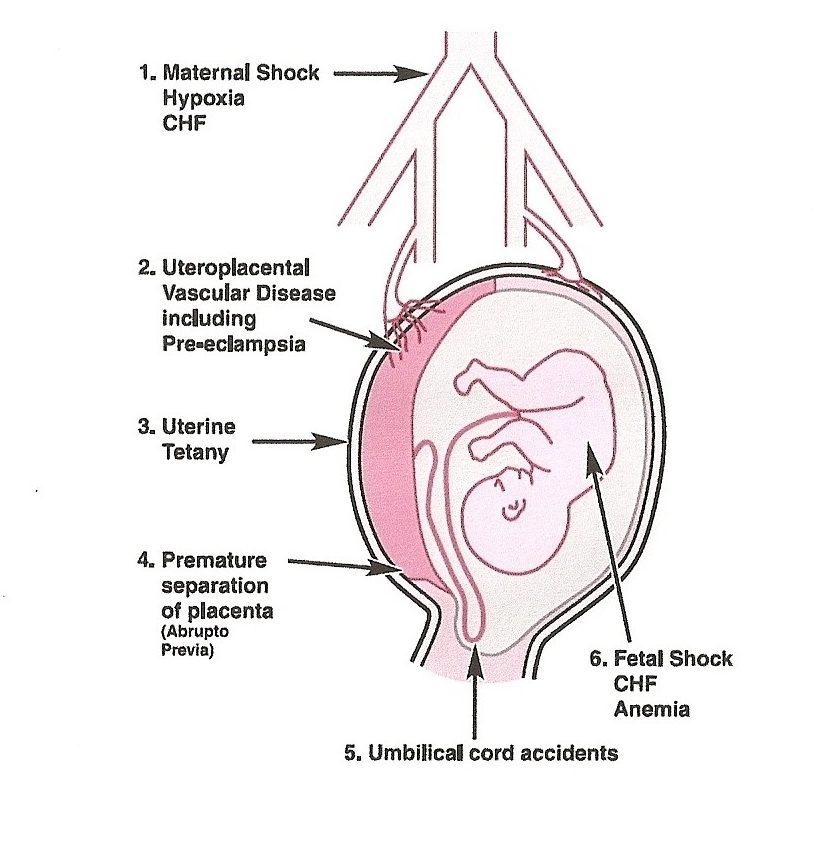 Often infants who have NE have perinatal antecedents, onset of symptoms, and a clinical course that are consistent with and typical of HIE. However, in some cases investigations are necessary to look for non–hypoxic-ischemic causes of NE such as:

1) Gestational Age greater than or equal to 35 weeks

3) Evidence of intrapartum hypoxia
a. Cord gas / within an hour of birth with pH <7.0 OR base deficit ≥-16
OR
b. pH 7.01-7.15 OR base deficit –10 – -15.9 with evidence of acute perinatal even that may result in HIE (e.g abruptio placentae, cord prolapse, uterine rupture, etc)
AND Apgar score 5 or less at 10 minutes, need for mechanical ventilation or resuscitation at 10 minutes.

4) Signs of moderate or severe encephalopathy defined as the presence of 3 or more of the items in the 6 categories below OR presence of seizures: 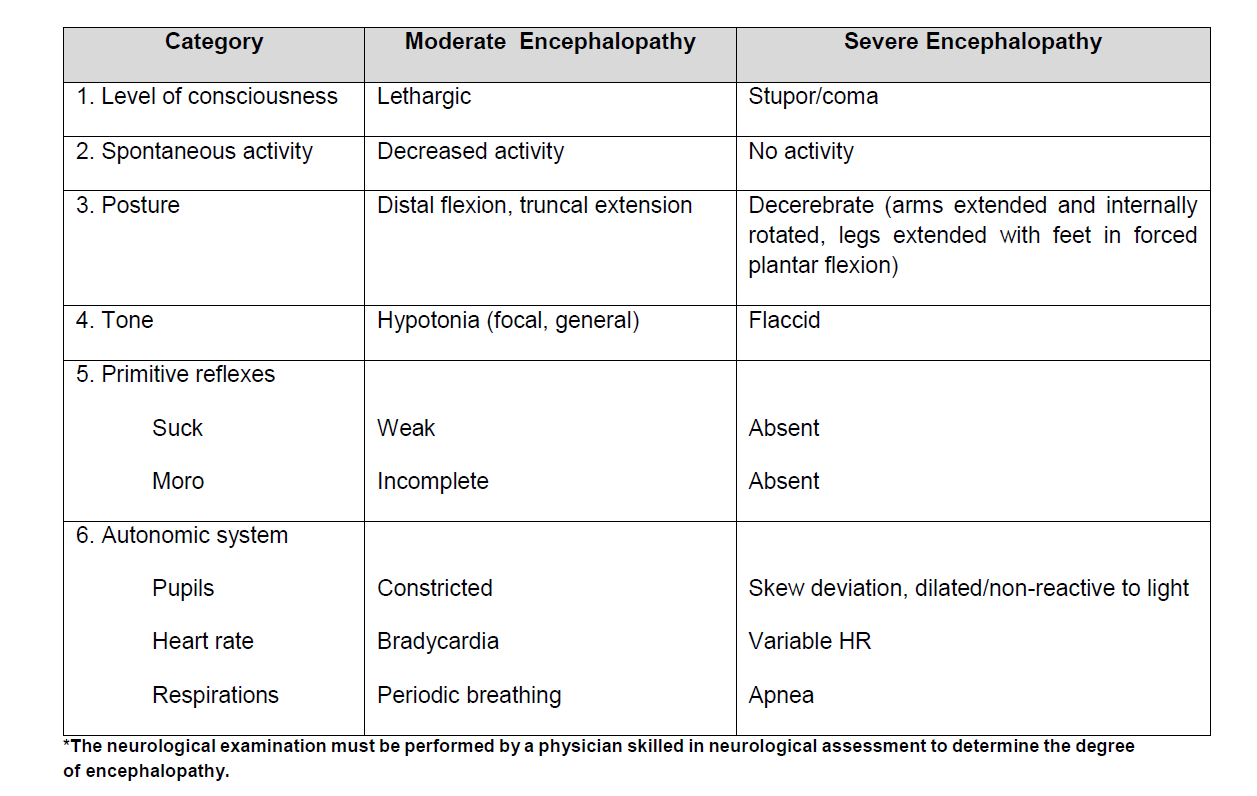 Evidence support use of TH: 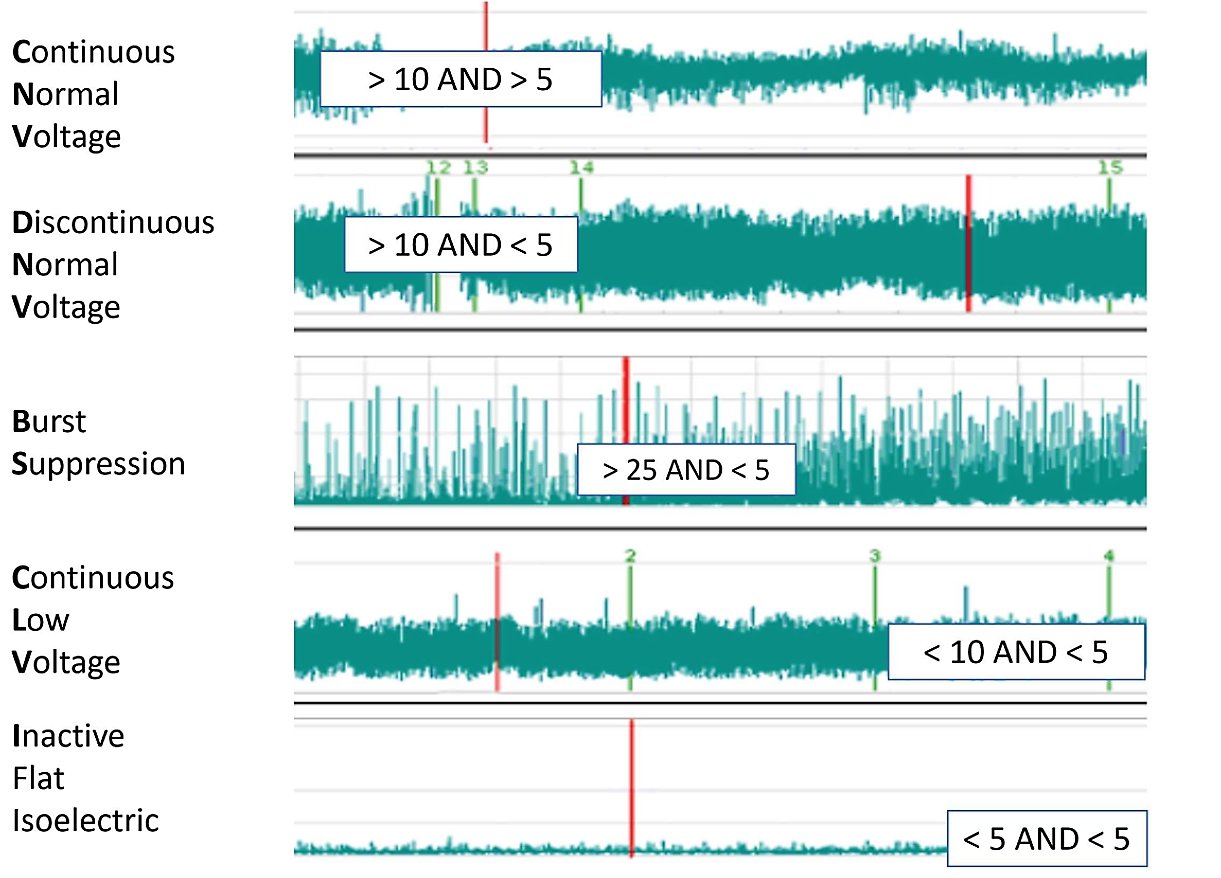 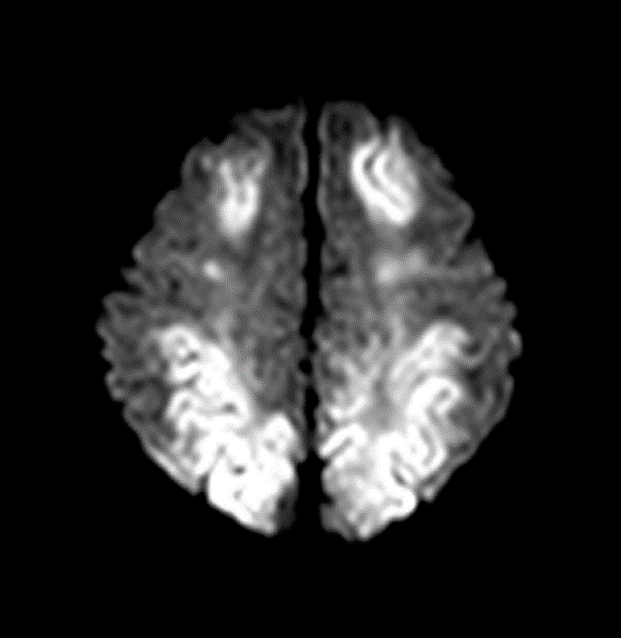 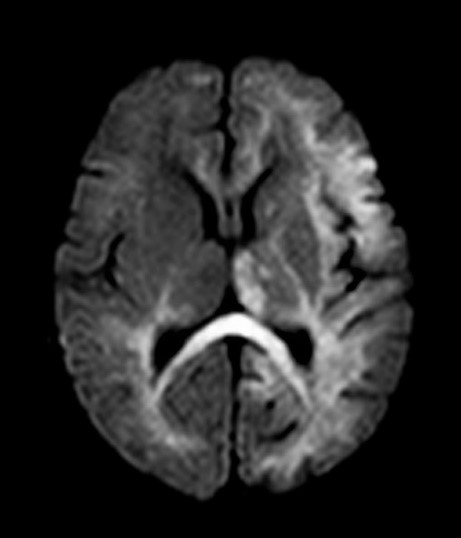 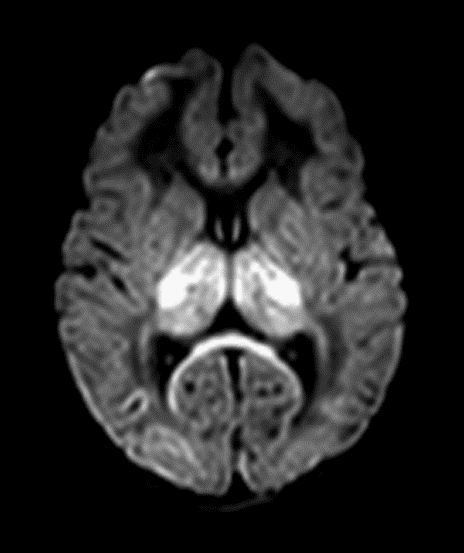 When cerebral edema resolves, the brain stem may regain control and spontaneous respirations are established. Infant may survive with one or more of the following long-term neurodevelopmental deficits. 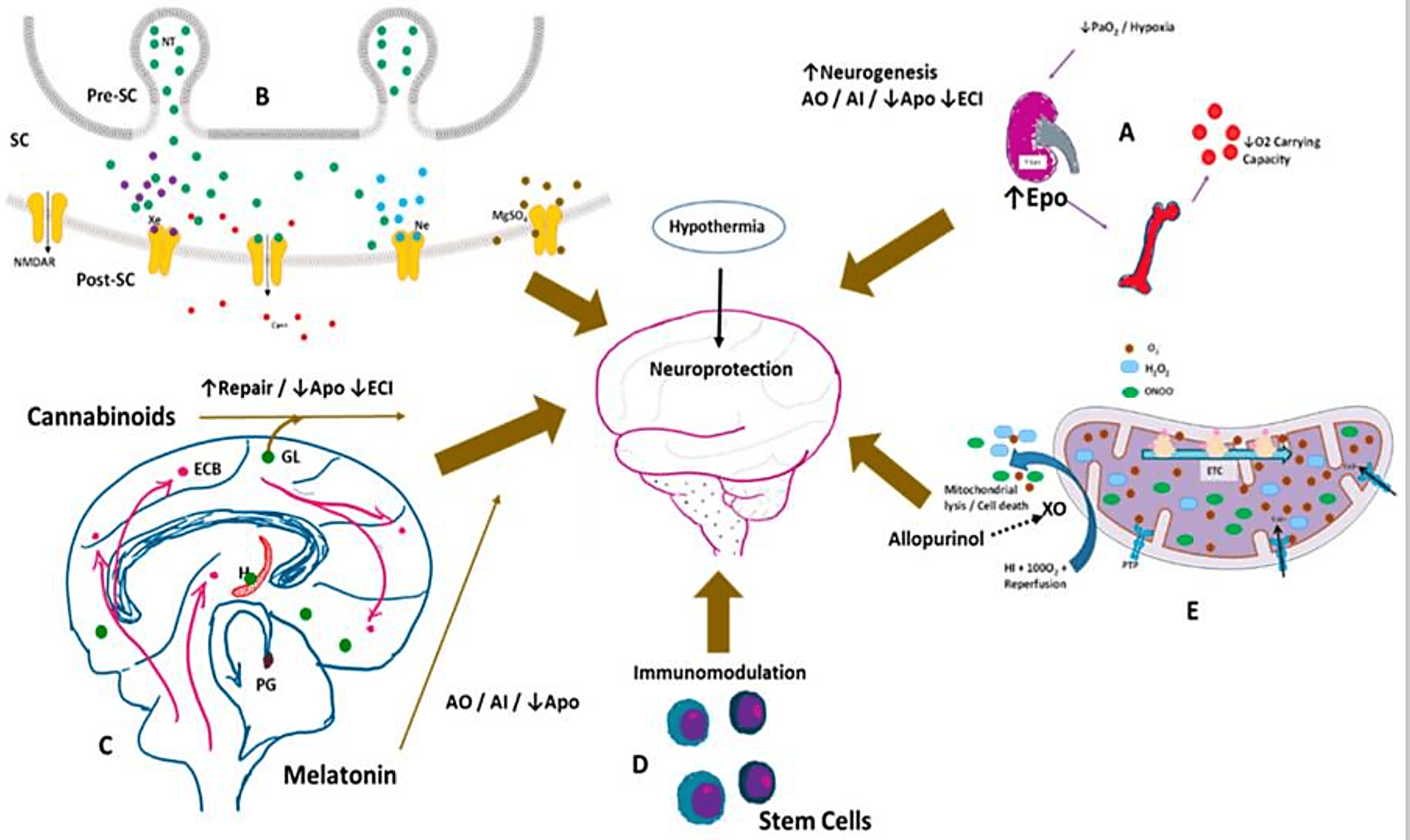 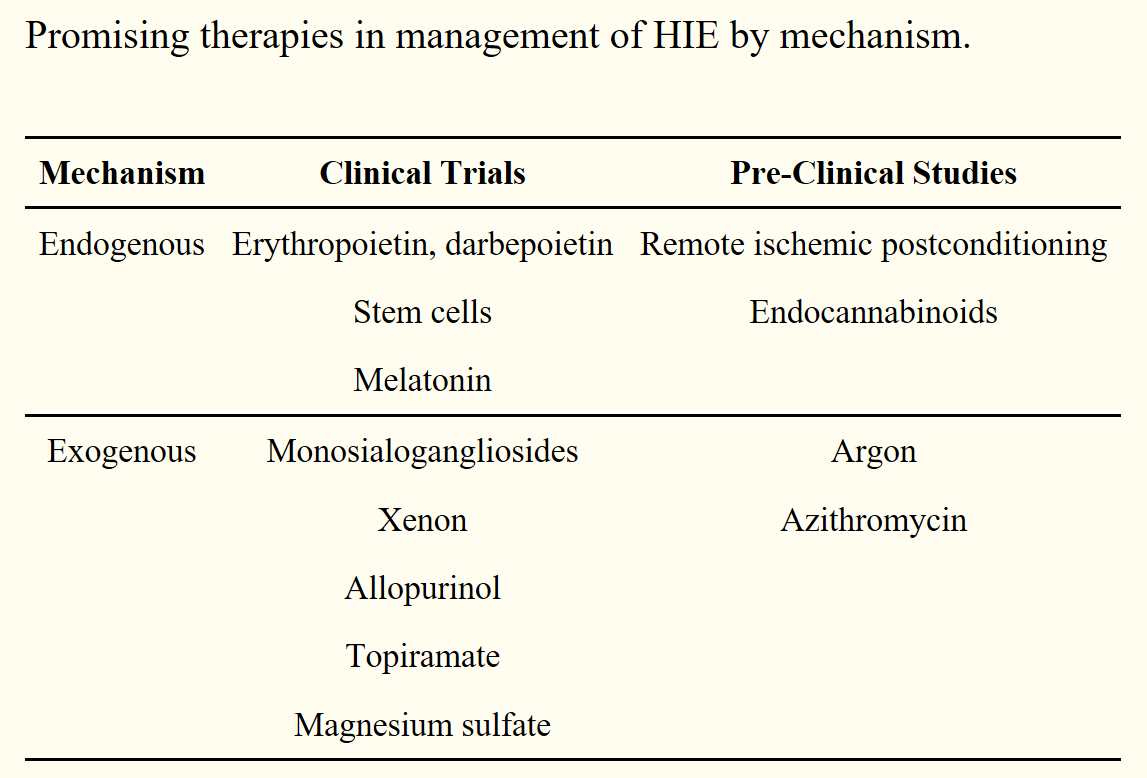 Brain Injury in the Preterm Newborn

Neonatal stroke can be defined as a cerebrovascular injury that occurs around birth. It can be focal or multifocal and may include both ischaemic and haemorrhagic injury. Neonatal stroke is frequently referred to as perinatal cerebral injury of ischaemic origin.

Delayed seizure onset and clinically observed focal seizures are predictors of stroke in neonates with seizures.

Two common subtypes are identified, perinatal arterial ischaemic stroke (PAIS) and cerebral sinovenous thrombosis (CSVT). There is still discussion about which other patterns of injury should be regarded as perinatal stroke. Periventricular haemorrhagic infarction (PVHI), which is more commonly seen in preterm infants, is also regarded as being part of the stroke spectrum.

An amplitude integrated EEG, (aEEG) should be obtained to evaluate seizures.

Full channel EEG is helpful to localise the origin of seizures.

Laboratory studies, to rule out other pathology, including hypoglycemia, electrolyte disturbance, infection and metabolic syndromes.

Cranial ultrasound is a useful non-invasive test, however it may not accurately diagnose stroke as it may appear normal shortly after symptom onset.

MRI (magnetic resonance imaging) is the most sensitive modality for detecting abnormalities of signal intensity.

Neonatal neuroimaging plays an important role in both diagnosis and prognosis and may be useful in predicting motor outcome. 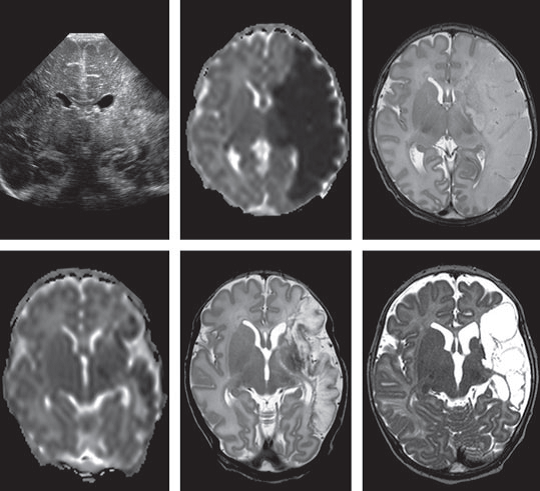 Anticoagulants may be useful to prevent propagation of thrombus in cases of CSVT without evidence of cerebral haemorrhage.

Both short and long-term outcomes mainly depend on the extent and location of the stroke.

In PAIS, unilateral spastic cerebral palsy is the most frequent sequela and has been reported in up to 50% of cases, depending on stroke location.

There are fewer studies on outcome following CSVT and reported outcomes vary.

Long-term outcome studies suggest that 60-80% of all infants develop some kind of deficit. Both motor and cognitive abnormal outcomes have been reported.

Symptoms are similar to those of postasphyxial HIE but tend to be milder (eg, Apgar scores higher and less need for resuscitation) or start later (eg, seizure onset on day 2 or 3 rather than day 1); in addition, coexisting asphyxia is often present. 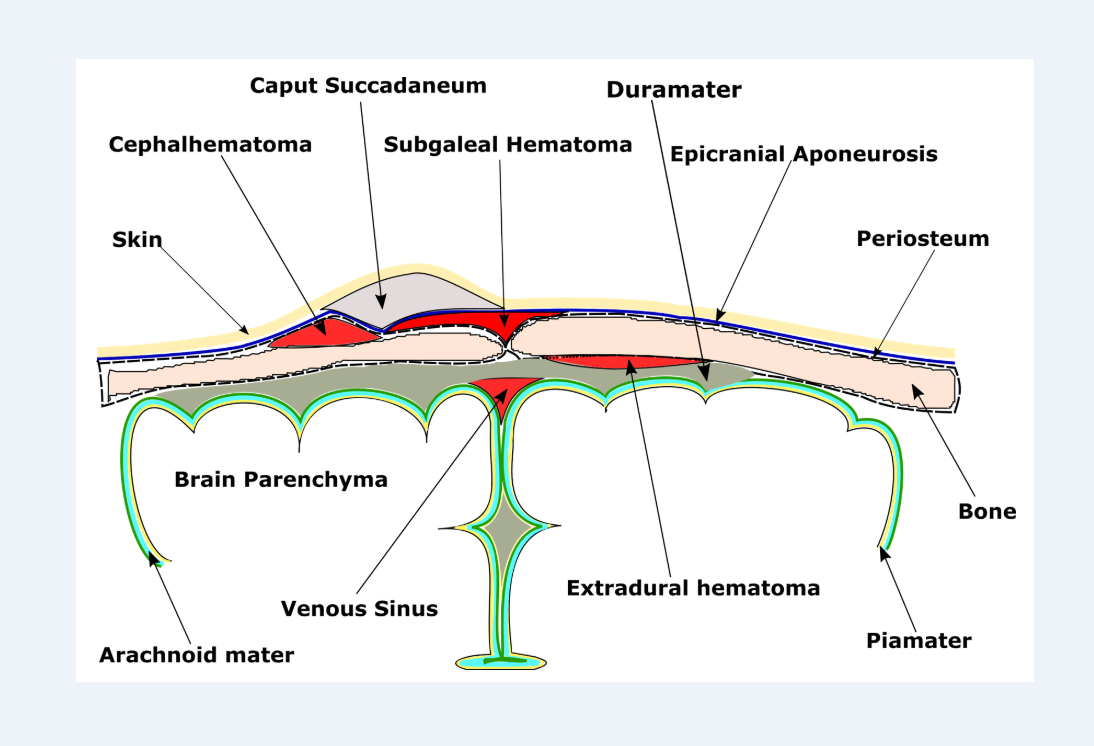 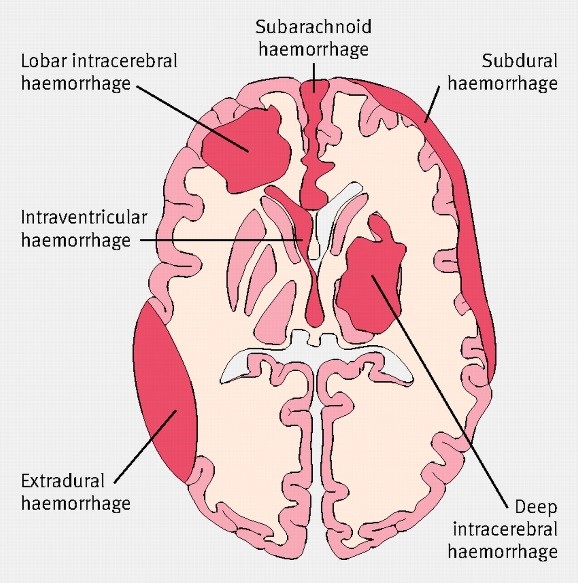 Shoulder dystocia and breech delivery, especially of large for gestational age infants, are the most common causes of brachial plexus palsy in new- born infants. The incidence varies from 1.5–4/1,000 deliveries. The injury takes the form of neuropraxia, axonotmesis, neurotmesis, or avulsion of the root.

The most common site is the upper part of brachial plexus resulting in classic Erb’s palsy, a characteristic external rotation at the elbow, with absent movements at the wrist and a pronated hand. The clinical presentation during the neonatal period is similar irrespective of the degree/severity of injury and its prognosis. Fractured clavicle or humerus should be ruled out as the cause of poor limb motility, or as coincident lesions.

A good functional recovery is reported in approximately 80 to 90%; 10 to 20% of patients have residual deﬁcits. Studies describing the natural history are lacking. Long- term consequences include loss of limb function, orthopedic abnormalities, cosmetic deformities, and psychosocial effects.

Surgical repair in the form of resection of neuroma and nerve grafting has been advocated for infants who have not recovered biceps function by 3 months. Surgical reconstruction has been reported to produce better results than non-intervention, using historical controls with similar severity of lesions. No randomized controlled studies have been performed yet.

A multidisciplinary approach involving neurosurgeon, orthopedic surgeon, physiotherapist, occupational therapist, and community pediatrician is warranted for infants who do not show demonstrable signs of recovery by 6 to 8 weeks of age. 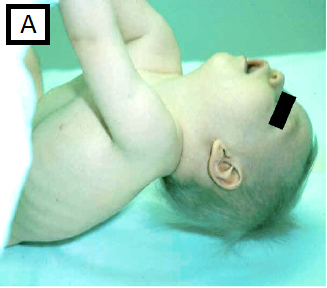 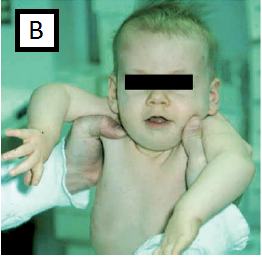 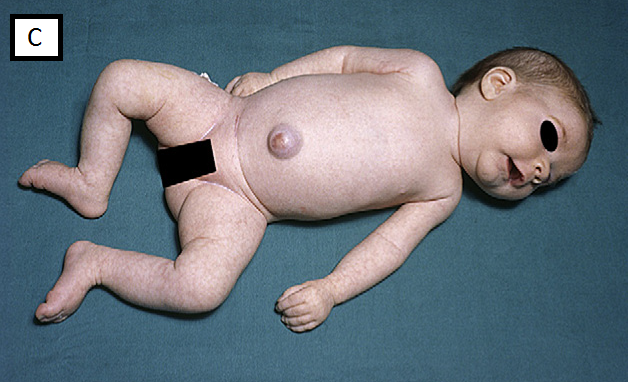 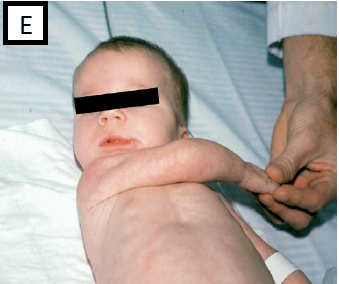 A. Clinical features suggestive of hypotonia of central origin: 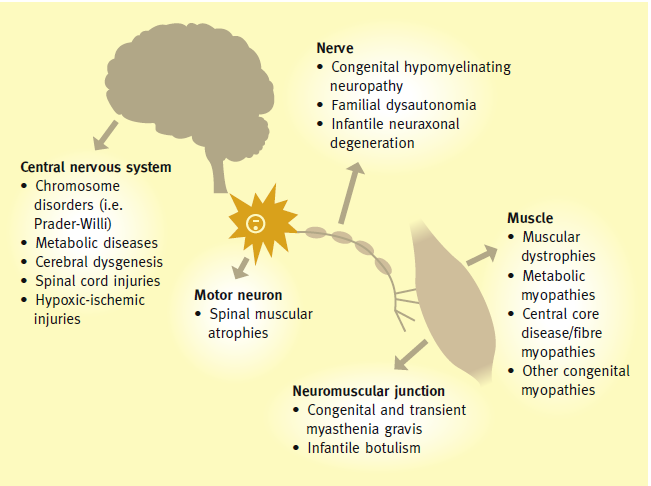 Diagnostic clues for causes of combined central and peripheral hypotonia: 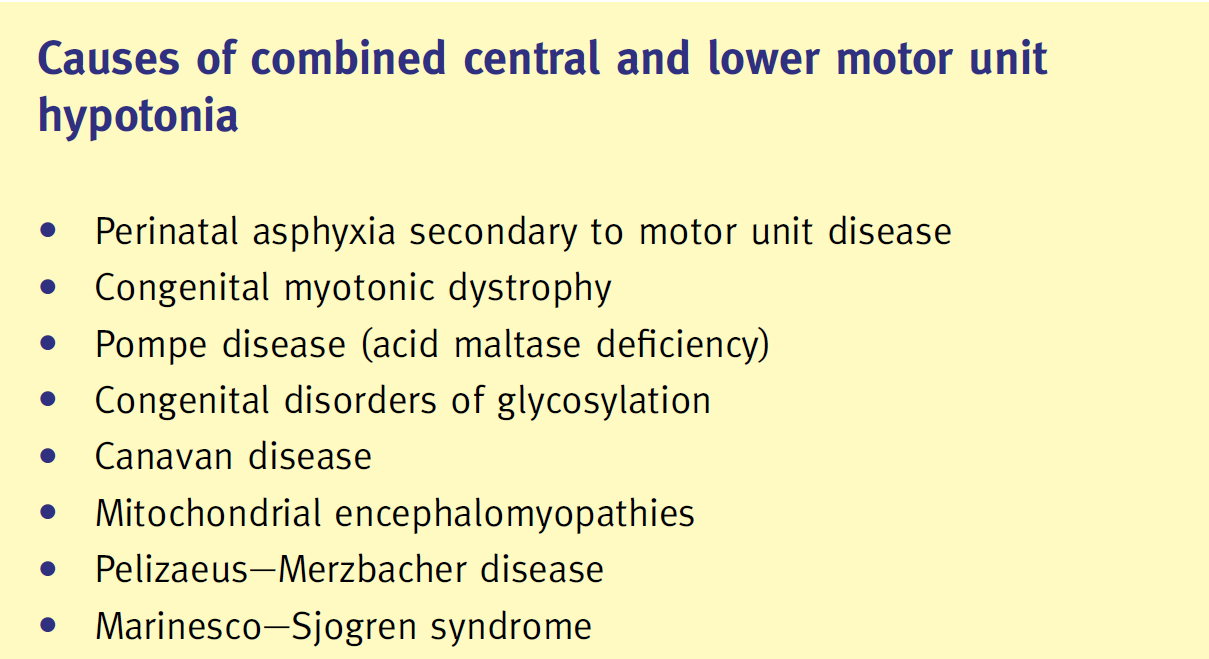 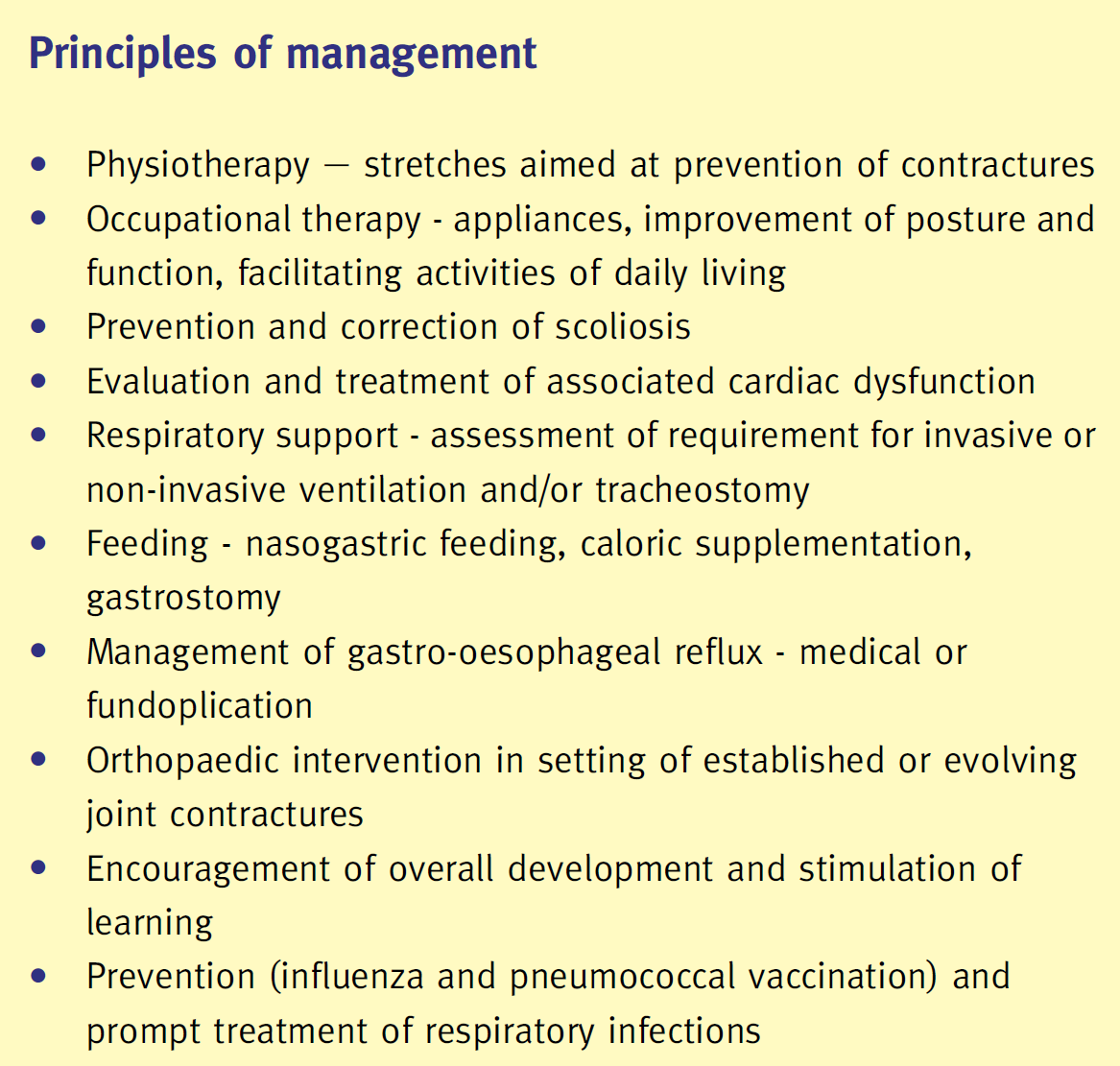 Neurology of the Newborn, 6th Edition