Human milk feeding decreases the incidence and/or severity of many infectious diseases including:

When direct breastfeeding is not possible (e.g. prematurity)., expressed human milk should be provided Ideally, this should be the mother’s own breast milk.

The Ten Steps to Successful Breastfeeding

The recommendations below form the basis of the WHO / UNICEF Baby-Friendly Hospital Initiative (called the Baby Friendly Initiative in Canada). They are currently the best recommendations to promote breastfeeding in maternity hospitals, and are being modified for paediatric hospitals.

Every facility or agency providing maternity services and care of newborn infants should:

These may be minimized by establishing adequate breastfeeding frequency postpartum and access to early breastfeeding support following discharge from hospital.

Excellent videos on lactation support are available at the following SickKids and CHEO sites: www.sickkids.ca/breastfeeding-program/videos/index.html

Lactation support for mothers of premature or ill infants

Shorter postpartum hospital stays of breast-fed infants may increase the incidence of undesirable effects such as:

These may be minimized by establishing adequate breastfeeding frequency postpartum and access to early breastfeeding support following discharge from hospital.

Drugs with known or possible side-effects (use with caution) 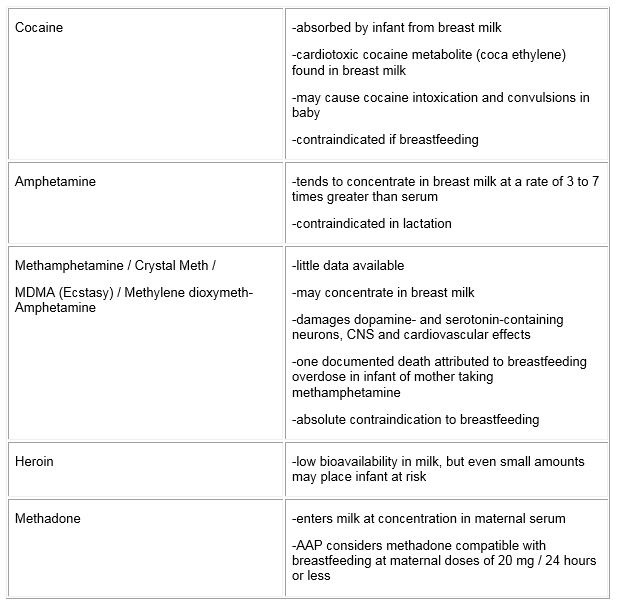 American Academy of Pediatrics. The Transfer of Drugs and Therapeutics into human breast milk: An update on selected topics. HC Sachs, Committee on Drugs. Pediatrics 2013;132;e796.

Guidelines on HIV and infant feeding 2010: Principles and recommendations for infant feeding in the context of HIV and a summary of evidence” by the World Health Organization