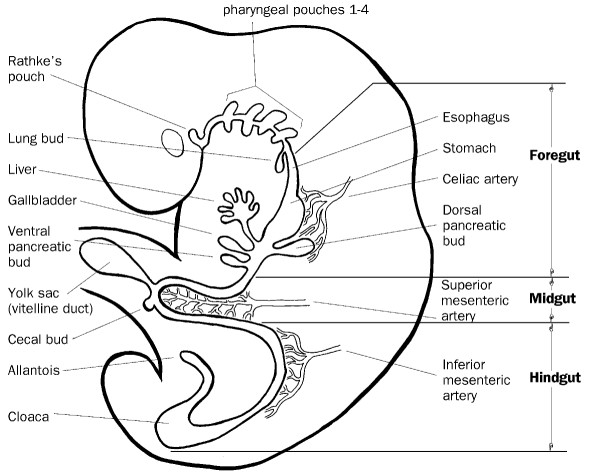 Gastrointestinal (GI) disorders that can present in Utero are listed in Table 1.

Postnatal adaptation of the GI tract is not always smooth. Even healthy term infants commonly have reflux, but more serious problems are likely in the very preterm infant. In addition, a number of serious congenital anomalies of the gastrointestinal tract present in the first few days of life (also see Surgery chapter). Postnatal adaptation of the gastrointestinal tract can be maximized by early feeding.

Specific problems of preterm infants, mainly with respect to control of GI motility, include:

5. Delayed evacuation of meconium and stools

Causes of abdominal distension at birth and their initial management are listed in Table 2.

1. Passage of meconium normally occurs within 24 hours of birth in term infants. Rectal stimulation or a glycerine suppository may resolve delayed meconium passage in some normal infants.

3. Upper GI obstructions cause upper abdominal distention and vomiting which is usually bile-stained; some meconium passage may occur.

Imperforate anus.  Inspection of the perianal region reveals abnormal anatomy – this is considered part of the normal newborn examination. Fistulas to the perineum or genitourinary tract should be looked for carefully, present in 80-90% cases, but may take 24 hours to declare. The lesion may be high or low (above or below the levator ani). Surgical correction is usually required. Of patients with imperforate anus, 50-60% have other defects, especially the VACTER association of anomalies (vertebral defects, imperforate anus, cardiac, TEF, and radial and renal dysplasia).

Hirschprung’s disease.   Also called congenital aganglionic megacolon, it is a common cause of neonatal intestinal obstruction. The aganglionic segment may be limited to the rectosigmoid colon or extend proximally to involve the entire colon or small intestine.  Diagnosis is suggested by abdominal films and contrast enema and confirmed by rectal biopsy. Colostomy is usually required, followed by definitive repair at 8 to 12 months of age.

Microcolon.  Demonstrated by contrast enema. Seen in infants of diabetic mothers and in association with ileal atresias, meconium plug syndrome and Hirschprung’s disease.

Peritonitis.  Peritonitis is usually secondary to perforation. Radiographs in the decubitus and a cross-table view should be obtained. CBC, differential and blood cultures should be taken and broad spectrum antibiotics started. Perforations are usually of small or large bowel, but can be isolated to the stomach.

Small bowel atresia or stenosis.  Duodenal or high jejunal atresia characteristically present as a “double-bubble” on plain radiograph of abdomen. Ileal atresias may be multiple.

Volvulus, duplication, or malrotation.  These conditions may cause intermittent symptoms and signs and are often missed. Midgut volvulus is one of the most serious emergencies seen in the newborn period, as delay in diagnosis may result in significant bowel loss with resultant morbidity and mortality. If suspected, urgent surgical opinion and contrast studies are required (also see Surgery Chapter).

GI obstructions presenting later.  Pyloric stenosis usually occurs within the first 3-6 weeks of life, but may be delayed in preterm infants. Diagnosis is confirmed by finding an ‘olive’ on abdominal palpation or by ultrasound examination. Fluid and electrolyte abnormalities (hypochloremic alkalosis) need to be corrected prior to surgery.

Post-NEC stricture.  Stricture formation is usually antedated by a clear-cut episode of NEC. Distension and vomiting may be intermittent and vague. Confirmed by contrast studies. May resolve spontaneously, but surgery usually required.

Incarcerated hernia.  Hernia is usually easily recognized clinically. Surgery is required for irreducibility or incarceration. For preterms, the hernia should be fixed before discharge, or when the infant is off supplemental oxygen.

Necrotising Enterocolitis (NEC) an inflammatory disorder of the intestine, usually seen in premature infants. It involves coagulation necrosis, bacterial overgrowth, inflammation and in severe cases necrosis of the bowel wall. It is a major cause of death and morbidity in neonates.

Incidence: The overall incidence of NEC is 1-7% of all admissions to an NICU.  90% of infants are preterm, with greater risk at lower gestational age. If perforation occurs, mortality approaches 40%. In term infants the main risk factors are congenital heart disease, perinatal asphyxia, intra-uterine growth restriction and polycythemia.

Diagnosis of NEC is based on presenting signs, laboratory tests and radiological or surgical findings. Definitive diagnosis is the finding of intramural gas (pneumatosis intestinalis) on abdominal X-ray. Some centres have started to include abdominal ultrasonography in the evaluation of NEC. The terminal ileum and ascending colon are most often affected, but in severe cases it can involve the whole gastrointestinal tract. Gas may be detected radiologically, ultrasonographically, at operation, or histologically.

Findings (AP and cross-table lateral) include:

3. Perforated NEC, with free air in the abdominal cavity.

Bowel necrosis is inferred clinically from severity of systemic illness, including shock, persistent thrombocytopenia, GI bleeding and abdominal signs (evidence of ileus, tenderness, abdominal wall inflammation, right lower quadrant mass). Some authorities have used paracentesis to determine indications for surgery. Isolated focal intestinal perforation, in the absence of NEC, is also recognized but appears to have a better prognosis.

Cultures of blood, urine, stool (bacterial and viral), and CSF (latter when stable)

5. Blood products may be needed to correct thrombocytopenia, coagulopathy or anaemia

6. Ventilatory support may be required for apnoea or increasing acidosis

Routine anaerobic coverage has not been shown to be of benefit however, it is recommended in severe cases involving perforation. Consider adding antifungal therapy if patient is not responding to antibiotic.  Antibiotics are usually continued for 7-10 days for uncomplicated NEC and approximately 14 days for severe or perforated NEC, however there is a lack of good evidence on duration of antibiotic coverage

9. Serial radiographs every 6 hours for the first 24hours, or while patient is clinically unstable

Duration of ‘NEC Regimen’ is based on clinical staging, see Table 3

Indications for surgery are:

2. Post-NEC bleeding due to strictures

3. Strictures, which occur in about 10% of cases, and are mostly located in large bowel; if   symptoms persist, barium enema should be performed

4. Short-bowel syndrome is likely if >50-75% of small intestine is lost

Difficulty in initiation of feeds, and or increasing feed volumes, is common in extremely low-birth-weight infants. The underlying cause is thought to be immaturity of GI motility, especially of gastric emptying.

1. Hold feeds while infant is being assessed.

2. Depending on clinical severity, consider abdominal radiograph, CBC and diff and blood gas to  exclude NEC or mechanical causes of abdominal distension (see above).

5. Cisipride is now contraindicated in premature infants because of prolonged QT interval.

6. Erythromycin, a motilin agonist, may be of benefit especially in older prems, >32 weeks

7. There is evidence that metoclopramide decreases the gastric emptying rates in preterm infants although use is limited because of adverse effects.

Early introduction of “minimal enteral nutrition” enhances maturation of intestinal motor patterns and release of GI hormones, without increasing the incidence of NEC.

Gastroesophageal Reflux in the Neonate

Gastroesophageal reflux (GER) is the retrograde movement of gastric contents into the oesophagus and above due to decreased  lower oesophageal sphincter tone. While GER can be physiologic in healthy thriving infants, it is more frequently associated with symptoms of disease in infants < 1500g. Acid reflux has the potential to cause injury of the oesophageal mucosa and oesophagitis.

Clinical features vary from simple regurgitation to vomiting of feeds to the association of GER with apnoea and bradycardia and aspiration.

3. Dietary Changes
– Thickening of feeds has been shown to be of benefit in term infants but data is lacking for preterms

4. Prokinetic agents act on regurgitation through their effects on lower oesophageal sphincter pressure, esophageal peristalsis or clearance or by increasing gastrointestinal motility. No ideal pharmacologic agent exists for infants.

5. Acid reduction to prevent inflammation of the lower oesophagus using H2 blockers or proton pump inhibitors. Should be used sparingly as increase infection rates and alter the microbiome.

Differentiate between upper and lower GI bleeding by placing NG tube and aspirating. Recovery of blood from the stomach is diagnostic of an upper GI bleed. Gastrointestinal bleeding is not uncommon, but the cause often remains unknown

1. Nasogastric tube irritation. This is the most common cause of GI bleeding, and is usually trivial.

2. Swallowed maternal blood (spurious GI bleeding) during delivery or from bleeding from nipple. An Apt test (on gastric aspirate/stool) identifies maternal blood, and is diagnostic. No treatment required. In an Apt test 1 volume of vomitus or stool is mixed with 5 volumes of water. The mixture is centrifuged briefly and 4 mLs of the supernatant (hemolysate) is mixed with 1mL 1% NaOH. Fetal hemoglobin (Hbg F) will remain pink, while maternal blood (Hbg A), changes from pink to a yellow-brown colour.

3. Gastritis / stress ulcers. This is the most common cause of severe GI bleeding and hemorrhage can be severe.

6. Hemorrhagic disease of the newborn. Seen in infants who did not receive vitamin K at birth or whose mothers took medications that interfered with vitamin K. Causes generalised bleeding, including hematemesis, hematuria and prolonged bleeding at venipuncture sites. Treatment is to give vitamin K, 1mg daily for 5 days, preferably by IV for active bleeding

2. Necrotizing enterocolitis. This condition is usually, but not always associated with minor GI bleeding, usually from the lower GI tract.

3. Malrotation and midgut volvulus. Volvulus may result in infarction of the midgut due to obstruction of the mesenteric blood supply. Abdominal tenderness or melena in association with bilious vomiting, suggests vascular compromise and requires urgent surgical intervention.

5. Intussusception. Rare before 3 months. Diagnosis made by abdominal radiography, ultrasonograpy and contrast enema.

3. For gastritis use nasogastric suction, saline lavage and H2 blockers (Ranitidine by  i.v. infusion, 500 micrograms/kg  once every 6 hours or with minor bleeding i.v.  q6-12h), to keep gastric pH > 5).

4. Gastroscopy and/or surgery is rarely required (yet consider when blood replacement is > 50% of blood volume.